BLOG #5E ~ The LAW & AUTISM… with < My Thoughts > by Sara Luker
State and Federal governments have introduced laws in many areas. Some of them are:
​The three major federal laws are Individuals with Disabilities Education Act (IDEA), Section 504 of the Rehabilitation Act, and the Americans with Disabilities Education Act, and the Americans with Disabilities Act (ADA). Tethered and trained service dogs are allowed where food is served, when accompanying the person with a disability. But, sterile settings such as hospitals, surgery centers, etc. may legally prohibit these animals. Check www.ADA.gov for specific information.

Yen & Mao (2011) say that parents often encounter unanticipated challenges in their efforts to find optimal treatment and educational placement for their child. One of the most difficult obstacles involves dealing with the legal aspects.
​
They go on to say that the Individuals with Disabilities Education Act (IDEA) is the primary law that is invoked when parents are trying to access services because it covers qualified individuals from age 3 to age 21 for educational needs. It includes Family Educational Rights & Privacy Act (FERPA) and Least Restrictive Environment (LEA). There are procedural safeguards in place and families of children with autism may need legal help to navigate the system when gaining access to programs as children and adults. 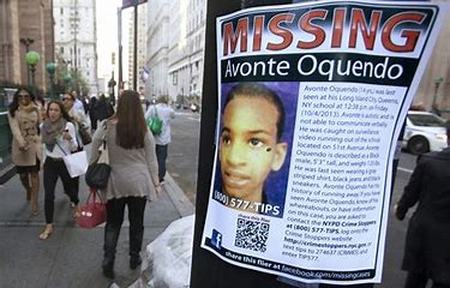 Then there is Avonte’s Law. Hilton (2017) reminds us that “…Shortly after noon on October 4, 2013, a 14-year-old African American 8th grade student named Avonte Oquendo” ran out of the side door of his school and into the community. Identified as severely autistic and nonverbal, Avonte had a “strong sensory affinity for trains, cars, and water systems.”
​
Avonte’s disappearance and the discovery of his remains several months later… “The medical examiner concluded that he had most likely fallen from an embankment into the East river and drowned.” This tragedy “prompted local officials and politicians to call for review of educational policies and school-security protocols for children with disabilities…”

Until recently, Hilton continues, the voices of autistic people have been absent from the conversation about why wandering is such an issue with this population. Naoki Higashida, a 13 year-old-boy with nonverbal autism, through facilitated communication, answered questions concerning his elopement activity.

Question: Why did you wander off?

Answer: My body was lured there by ‘something’ outside. As I was walking farther from home, I didn’t feel any fear or anxiety. I had to keep walking on and on. Turning back was not permitted, because roads never come to an end. Roads speak to us people with autism, and invite us onward. Until someone brings us back home, we don’t know what we’ve done and then we’re as shocked as anyone.

< My Thoughts >         “…prompted local officials and politicians to call for review…”

Why do we wait until there is a tragedy to write or change laws? We don’t seem to be a society of ‘prevention’, rather one of ‘fixing after the fact’. It seems true that laws which shape the treatment of the autism population have passed the learning curve and may hit the wall. Smiles.

Lesco, retrieved from https://www.autism.com/advocacy_lesco Lists the ‘basic eligibility criteria’ for getting support when seeking employment – Some have said that unless the person can prove significant disability, they may not qualify. An example was given that a person with Asperger’s and ‘strong intellectual abilities’ may not qualify for assistance. Hmmm…

Green (2013), in her review of various articles, discovered that much of the literature brings up the ‘invisibility of autism’. Families seem know long-term stress and anxiety because of experiencing societies’ expectations of the person with autism, the ‘invisible disability’.

More about LAW and work from Clifton, et al. (2017). The passage of the Workforce Innovation & Opportunity Act (WIOA) states “coordinated efforts between educators and rehabilitation counselors, in an Individualized Educational Plan (IEP) meeting, should foster collaborative goals for literacy success, integration into the community, and quality employment outcomes.”

Depending on the student’s age, and the state law, the student should have a ‘Transition Plan’ written into their IEP by the age of 14. This widely varies from state to state and school district to school district. If your child is not offered one, there is another law in place – Due Process.

According to the website http://www.wrightslaw.com/info/trans.legal.bateman.htm “The ultimate responsibility for providing transition services rests with the school district or state education agency if the school district fails, and there is NO provision for a waiver of this Transition Plan requirement. This applies to all institutions to which Individuals with Disabilities Education Act (IDEA) applies.

Berryessa (2016) tells us that a study showed fifteen judges knowing an ‘offender’ has High Functioning Autism (HFA) would be an important factor in sentencing them. If judges, juries, and other criminal justice professionals understand that possibly the offenders condition led to ‘committing criminal actions’ then it could be considered as ‘mitigating’ or ‘aggregating’ circumstances. Rather than focusing on traditional sentencing, they could order assistance, therapy or treatment for these offenders.

Some judges believed that impulse control problems will lead to future offenses. One judge stated that he thought it should help to put the whole picture into perspective. This study showed that the majority of judges would rather order sentencing alternatives rather than sent the person with HFA to prison. While yet other judges felt that the courts didn’t yet have the formal tools to change sentencing outcomes.

Cea, C. (2014) believes that ‘The distinction between autism and an intellectual disability’ is crucial for a criminal defendant. This is because a court may better recognize an intellectual disability in the context of the insanity defense. Awareness of the legal community and the criminal justice system may find ways to integrate the ‘autism factor’ into the federal sentencing guidelines. This ‘factor’ could include the diagnostic criterion for ASD.

​An example of a criminal acts stemming from an obsession/special interest, for instance, was a person who stole computers in order to disassemble them. Thus fueling his passion for seeing what was inside the device. Other factors which may predispose those with ASD to seemingly criminal behaviors would be aggressive behavior, poor social understanding, stress or anxiety from disruption of routines or perceived threatening events.

Just thinking about how students have attacked me physically or verbally with a chair or with foul language, makes me realize that any onlooker could believe that a crime was being committed. Persons with lack of impulse control, with the physical desire to strike out or grab someone inappropriately, often engage in disruptive actions which continue over and over, due to perseveration.

According to Frekelton (2013) Autism Spectrum Disorder, as defined in The American Psychiatric Association's Diagnostic and Statistical Manual of Mental Disorders (DSM-5) can help clarify family, disciplinary, discrimination, and criminal law contexts. He stresses that insights into the behavior and the purpose of the behavior are crucial when it comes to interpretation by law enforcement, or the courts. This will require the help of experts to make a connection between conduct, capabilities and skills when it comes to making criminal conduct decisions.
=================
REFERENCES used in essays and in < My Thoughts > are:

Information about INTERVENTIONS, THERAPIES, PROGRAMS, and/or TREATMENTS is presented without intent or suggestion of status or effectiveness; or even with the title of an autism ‘intervention’. Most places in the literature and even in some laws, the word ‘intervention’ is used interchangeably with ‘instructional/educational program’, ‘therapy’, and ‘treatment’. The very word ‘INTERVENTION’ when used in the same sentence with ‘autism’ may imply ‘cure’ or ‘long-term’ effect. That is NOT the intention here.

Autism ‘intervention’ as with the phrase, “Early Detection / Early Intervention” may simply mean an ‘action’, or an attempt to ‘change a course’ or trajectory of autism. Also, the expectation for success is that all ‘interventions/therapies/programs will have the cooperation of the participant, the parent, and/or the assigned therapist.

There are many different types of treatment programs, interventions, and services being tried by parents and schools. Also, your child’s challenges may require having several non-competing therapies at once. Therefore, carefully consider the cost and time involved for your child and your family. Be very careful to fully understand your obligations. To some, AUTISM is a business. So, remember that gym/spa membership you paid for every month for three years, even though you only went there a few times? You could find yourself in the same type of situation here.

Disclaimer: Just to let you know that I, Sara Luker, have put forth my best efforts to create the extended book reviews presented here on this website. I have permission from the authors to publish these Extended Book Reviews. This is just a sharing of stories of those who have gone on before us. Please, understand also that all health matters ALWAYS require professional medical decisions, diagnosis, and treatment by highly qualified and licensed individuals.

Recently, I have added “What to Do While You Wait” to the website. This collection of information is for educational purposes only; to begin your investigation and search for knowledge. My hope is that you will not feel alone when dealing with the mysteries of Autism Spectrum Disorder.